Our final episode of the IWD podcasts has been created in partnership with our francophone sisters from Actions Femmes. The English description follows the French. 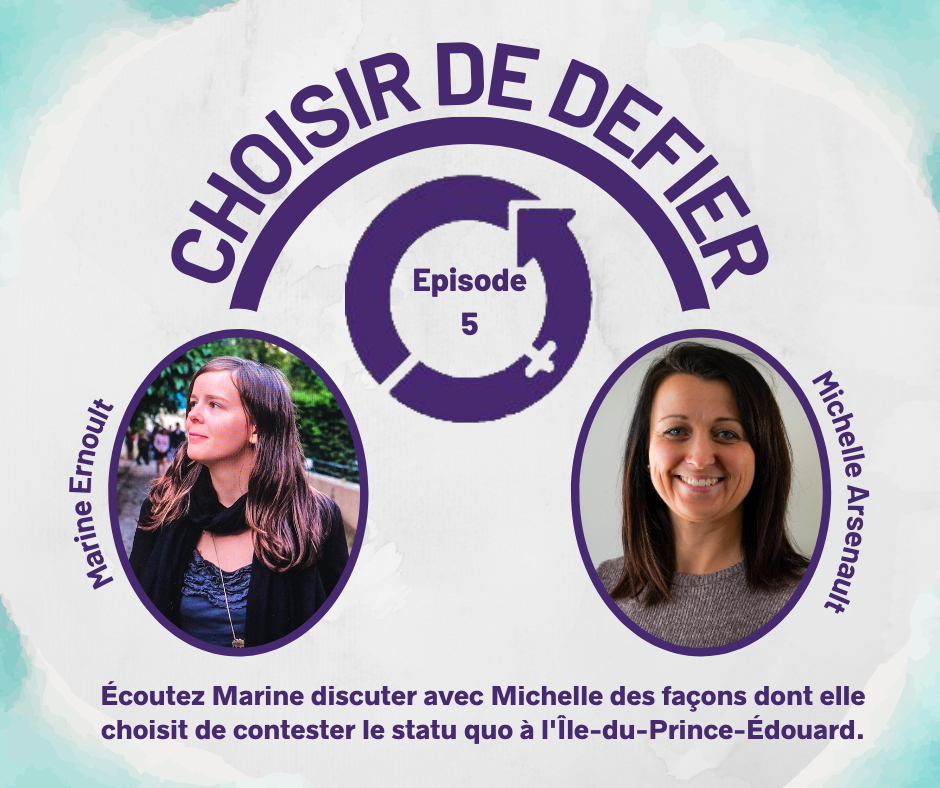 The fifth episode of this series presents Michelle Arsenault, a “true Acadian”, an independent woman proud of her origins, her language and her community. Interviewed by Marine Ernoult, a French journalist who recently arrived in PEI, Michelle shares precious moments of her life.

She tells us about:

“I wish that all women have the courage to do what they are passionate about, that being a woman is not a challenge. I wish to live in a society where women do not have to worry about doing what they want”, Michelle says forcefully.

“A pure Acadian”. This is how Michelle Arsenault defines herself. Born and raised in the Evangeline region, like her parents and grandparents before her, the Islander still lives in Abrams Village. At 37, the director of Service Finances Î.-P.-É. has taken up many challenges, whether in her personal or professional life.

At 17, in grade 11 at Evangeline School, Michelle became pregnant. An event which forced the “shy and reserved” young girl to “mature a little faster than the others”. She did not give up and handled her studies and her life as a young mother simultaneously. For Michelle, her daughter’s birth was a stimulus. The Acadian woman realized the importance of transmitting its culture, language and values.

After her graduation from Evangeline School, Michelle pursued her studies in the bilingual administrative assistant program at Collège de l’Île. In 2003, she started to work for four years at La Voix acadienne where she improved her accounting skills. Always looking for new challenges, she became an administrative assistant at the Francophone Integration Cooperative, before working shortly for the provincial, and the federal government’s and realizing she needed something else.

Championing for the cause of the francophone and acadian community meant too much to her. Thus in 2009, she joined the Acadian and Francophone Society of Prince Edward Island as an administrative assistant, before climbing up the ladder to take the lead of the new Service Finances Î.-P.-É. four years later. Always wanting to learn new things, Michelle also took evening classes at the University of PEI, where she passed a certificate in business.

Marine Ernoult
Marine, born in Marseilles, south of France, always wanted to be a journalist, but she took side roads to make her dream come true. In 2013, after a master in environmental law, and another one in urbanism law, she took off for a one-year trip along nine iconic rivers in the world. This experience gave her an appetite for reporting and made her realize she needed to change her path. After a short job as a jurist in a farmers union, she went back to school, again, in 2016 and at the age of 29, for her third master, in journalism this time.

Graduated in 2018, she started to work as a reporter in a local newspaper in Alsace, east of France. One year later, new change of direction and new challenge, she decided to immigrate, with her partner Laurent, a journalist too, to Canada.

She arrived on Prince Edward Island in September 2019, and started rapidly to work as a freelancer for the local newspaper La Voix acadienne, for the Francophone Press Association and for Francopresse. She also wrote some articles for the France-based national newspaper Libération, particularly about erosion.

For Actions Femmes ÎPÉ, she wrote the long-from series Féminin PluriElles, about the challenges faced by francophone women on the Island.