The Equality Report Card is a process to assess Prince Edward Island’s progress towards women’s equality goals. It was initiated by the PEI Advisory Council on the Status of Women in 2007. 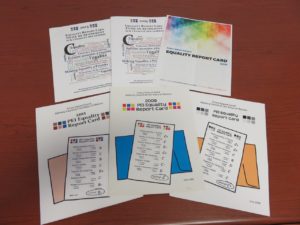 Previous Equality Report Cards were published in 2008 (pilot), 2009 and 2011; 2013 and 2015; and 2018. Models and benchmarks were adjusted by Council members each time there was a new government mandate.
The renewed model represented in this document is intended to simplify reporting and assessment and make these more transparent. The new model rewards the work of sustaining equality goals that have been achieved up to April 2019 and provides more room for government to nominate their own priority actions towards gender equality.