The tenth anniversary gathering of past and present Chairpersons of the PEI Advisory Council on the Status of Women took place on June 9, 2021. Current Chairperson Cathy Rose hosted the Chairs Circle at the Haviland Club in Charlottetown and welcomed eight past Chairpersons to a roundtable discussion on the theme of “feminist recovery from COVID-19.” The Chairs in the room covered over 40 years of the Advisory Council’s history, from 1979 to the present day. 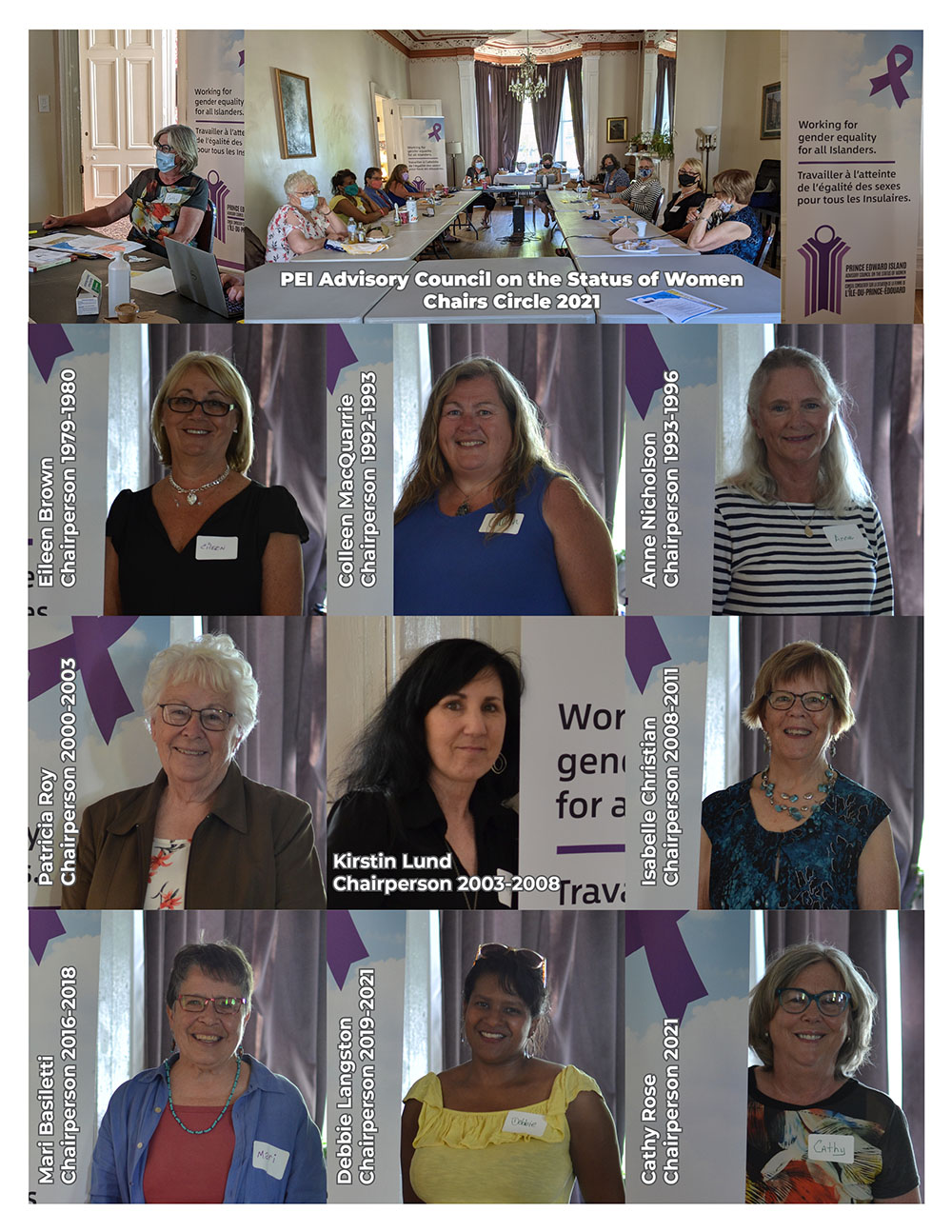 Recovering from COVID-19 is far from the first impossible-seeming challenge Advisory Council on the Status of Women Chairpersons and members have faced since the Council was formed by the provincial government in 1975. They reflected on their part in the history of working to help establish the first transition house emergency shelter for women leaving abuse; gaining or expanding maternity and parental leave and benefits for new parents; celebrating the not-yet-repeated success of “PEI’s Famous Five” in PEI gaining political leadership; seeking systemic accountability for a doctor who sexually assaulted patients and was allowed to return to his work; repatriating abortion care to Prince Edward Island after 35 years without access to care; and bringing an activist consciousness of racism and Black Lives Matter to Prince Edward Island residents and policy-makers.

Cathy shared some of the sobering facts from YWCA Canada’s work on the need for a feminist recovery. She described the statistics as “alarming” in terms of job losses experienced by women, burdens on caregivers due to school closures, the rise in gender-based-violence, and the vulnerability of BIPOC workers, migrant workers and other marginalized groups doing so much of society’s unpaid and underpaid essential work.

Here in PEI, the Chairs reflected that we have seen most strongly the effects of the pandemic on women’s employment, as they have left or been forced from the workforce by caregiving responsibilities or by loss of jobs in the service sector. They also spoke about the new visibility of women, especially young women and BIPOC women, in difficult low-paid work in essential services such as grocery stores, cleaning services, childcare, and the healthcare system.

They expressed concern about the housing crisis in PEI and its effects on low-income people and young people, and newcomers who want to make a life in PEI. Numerous Chairs expressed hopefulness that the success of the Canada Emergency Response Benefit in helping people meet their basic needs will translate into a basic income guarantee.

The effects of the pandemic and the public health response to it were felt unequally among the people of PEI, and the intersections of identity that expose people to overlapping forms of prejudice at the same time, including sexism, racism, classism, ageism, ableism, and more. Several people spoke of the racist treatment by justice, health, and media officials of a young Black man who broke self-isolation, compared to the treatment of others who broke the rules in anonymity. This was but one example of inequity and injustice.

Several of the Chairs are seniors and spoke movingly about the effects of social isolation on seniors and elders and how the pandemic revealed tragic flaws in long-term care that affect more senior women than men. The Chairs universally spoke about the need for mental health supports as we recover from the pandemic, and how essential mental health services and supports will be for a feminist recovery, especially for parents and children for whom the effects have been particularly difficult. Helping youth catch up on lost education and emerging adults recover from lost opportunity will be a society-wide challenge. Dealing with the anxiety people will feel as we return to some routines and expectations will need to be addressed. The Chairs expressed their deep concern for those who live in situations of violence at home or in their families or relationships and expressed the need for a previously unimagined level of planning and support for people who have experienced trauma, abuse, and violence.

Several Chairs spoke about the potentially revolutionary effects of a forced pause from capitalist getting and spending: it is a revolutionary moment some said they hope will continue for the liberation of people oppressed, impoverished, dispossessed, and marginalized by the way we “normally” do things.

As one Chair reflected, “This is a crucial time. We don’t want to lose this. We’ve seen how awful things are for so many people, and we can’t unsee that. Council will be important and [each of you] will be important in your communities to say: we have to change. We can’t go back to normal. Normal isn’t good and isn’t serving a big part of our community.”

The regrets this year from Chairs who could not attend also tell the story of this year and of feminist recovery from COVID-19: caregiving responsibilities, especially as grandparents; self-isolation after travel for caregiving; an earlier than expected second dose of COVID-19 vaccine; and exhaustion in a week with two vigils, one in solidarity with the Muslim community after Islamophobic murders killed three generations of an Ontario family, and one commemorating victims and survivors of residential schools after the first group of 215 unmarked graves were found on the grounds of a former BC residential school.

The current members and staff of the PEI Advisory Council on the Status of Women are grateful to stay connected to the history and wisdom of past Chairpersons.