It’s always hard for me to pick out when I first experienced gender-based violence. Was it the bullying I received when I was in grade school for being too “girly?” Or was it the harassment I received online for being a trans woman? Or was it getting groped in a bar on my 30th birthday? The sad reality is that as a trans woman, statistically this will not be the only assault I experience in my life.

One year into my transition I was sexually assaulted at a bar here in Charlottetown. I can still play the moment back in my head. I remember the red dress I was wearing. I remember their hands on my body. The revulsion I felt after. I remember the fear I felt as I left and went outside to wait for my ride. I remember crying in the car on the way home. I remember people telling me, “welcome to being a woman” and “that’s what you get for having a cute butt.” This event made me feel unsafe in ways I never felt before. To this day I will not go back to this bar.

In my head I often minimize this assault. I tell myself it was not that bad, other people have had worse things happen to them. The truth is that this incident was that bad and so are all other incidents that happen to other people. As a trans woman, I was lucky that this incident did not go any further than someone in a crowd groping me. I know that may sound odd to hear that I see myself as lucky, but unfortunately gender
based violence against trans people often ends in death.

The trans community faces many forms of violence in all aspects of life. From being treated like predators to harassment in public to domestic violence at home. This violence starts early and lasts our whole lives. Laverne Cox said “It is revolutionary for any trans person to choose to be seen & visible in a world that tells us we should not exist.” This is one of my favourite quotes. It informs why I do the work I do, while also acting as a reminder to me of the cost both to myself for doing the work, and the consequences if this work is not done.

To date the murder of a trans woman that has most deeply affected me is that of Julie Berman. I read about Julie’s murder on December 26, 2019. Up until this point, I was able to put a certain distance between me and the violence because the only cases that I was seeing were those in the United States. But Julie was different. She was Canadian like me; she was an advocate like me. Julie was followed into her building, beaten and left for dead in her home. She died of her injuries in hospital. It is my firm belief that Julie’s high profile within the community was the only thing that made her death noteworthy in the media. Unfortunately in this country, the murder of trans people often go unseen or are misreported. In death, trans people are very often misidentified, misgendered and stripped of ourselves. Globally, the average life expectancy of a trans person is estimated between 30-33 years of age.

As a 32 year-old trans woman I have been thinking a lot about this statistic. It’s not an easy pill to swallow that the life expectancy for people like me is so shocking. This is especially true as I turn 33 next week. As a trans woman, even here in PEI, it always sits in the back of my mind that every day I walk outside might be my last. Not in the “anything could happen” sort of way, but in the “I may be murdered for being trans” sort of way.

I have focused on gender-based violence, the murder of trans women, and the brutality we face for no other reason than daring to be ourselves. I have focused less on sexual violence because for me the reality that I may be murdered for who I am is in some ways easier to deal with. I think this speaks to the prevalence of sexual violence against women and the deep scars that it leaves.

It is time for us to change the systems and focus not on telling women to change their behavior, but on teaching others not to kill us. Not to assault us. That our bodies are ours and that we have every right to them. It is time for us to examine violent behavior and not turn a blind eye to the pain and harm that is happening. Allyship is not a passive activity. We need to protect those that have survived gender-based violence and end or change laws that protect our abusers. Laws like the “Trans Panic Defence” which allows leniency in cases against trans people. Until we are all safe from gender-based violence, none of us are safe. 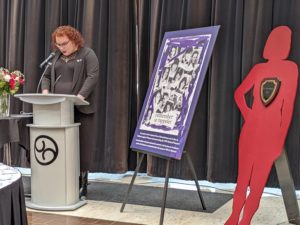